Waiting for Justice... but how long 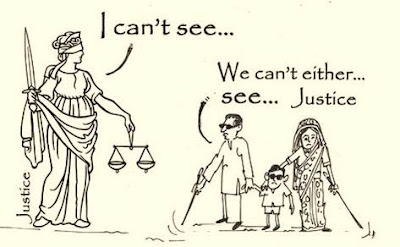 It’s close to a decade I am associated with the legal system actively. I have counselled many clients related to various matters from petty issues of conflict to serious crimes across various strata of society, women and child issues haunt the most while there are many related to cheque bounce and property disputes.

As a lawyer my primary goal is to resolve the conflicts my clients face with right legal advice and actions be taken as prescribed by the law of the land. One of the most important things I focus is on Speed of resolution. Sooner the issue resolves happier are the clients. A lawyer’s role is similar to that of a doctor; give the right medication so that the patient overcomes the illness ASAP…

I started to research from various sources across the internet, newspapers, legal databases and many more sources to compile an interesting statistic that often I open up to my clients during the conversation and show them the pain one has to go thru when he/she files a case that can be otherwise resolved amicably thru alternative means. Of course I charge my fees for the clients who consult me but I feel satisfied that the matter is resolved without wasting time for all the parties involved and helped reduced some burden on the already overburdened judiciary ….

Here is snapshot I’ve compiled on the cases pending in Indian courts …
-
As of Dec 2015 the Supreme Court of India had  approximately 47,000 civil cases and approximately 10,750 criminal cases pending and out of these 125  civil and 75 criminal are pending since 10 years

-          As of Jan 7th 2016, the data shows 45 Lakh cases pending before various high courts of India, and out of these approximately 10 Lakh are criminal cases and with the unfilled vacancies and various other barriers in the process including availability of lawyers, filing process time and first time right defect free filing etc… its predicted that the pending cases will reach One Crore by end of 2016.

-          The commendable job done by the Indian judiciary although the case backlog continues to grow due to various challenges the disposal rate has been more than 97%. Looking at the data between 2002 and 2012 indicates 1.18 Crore cases were filed out of which 1.15 Crore cases were decided by the major high courts of India.

-          The problem today is not about disposing the case, or the quality of justice delivered but the burden on the judiciary is because of the enamors  backlog of 3.25 Crore cases pending in various courts of India, out of which approximately 30 Lakh cases are pending since last 10 years is a bigger problem

-          55,000 couples are waiting for divorce in India. Bangalore alone has more than 9000 cases pending in the family court with couples jostling to sort out matrimonial issues. Every year 500+ new cases are filed and is increasing year on year with as many as 60 – 70 cases come up for hearing every day

The Bar Council of India (BCI), the regulator of all Indian advocates, states on its website that there are “approximately” 12 lakh+ lawyers in India plus “approximately” 400,000 to 500,000 studying law at this very minute, churning out “approximately” 60,000 to 70,000 graduates every year.

As a lawyer, is it not our moral duty to reduce the burden on the judiciary by advising an out of court as a first option followed with other options …

Sonia Rajesh
I am a practicing advocate in Bangalore Highcourt. My goal is to ensure my clients get justice and victory... Areas of Practice: · Mutual Consent Divorce · Contested Divorce · Annulment Of Marriage · Restitution Of Conjugal Rights · Maintenance (Interim and Permanent Maintenance) · Child Custody (Visitation, Interim and Permanent) · Criminal Proceedings (Bigamy, 498A etc...) · Domestic Violence and Alimony settlement · Registration of Marriage · Power of Attorney · Documentation and Registration of Will · Pre and Post Marriage Councelling Contact : lawyersonia@gmail.com Phone : 9845944896